UFC on Fuel TV 4 did not disappoint; it was a night of exciting fights with some surprising wins and a lot of finishes. Here’s how it went down.

Munoz didn’t even stand a chance. Weidman put an end to his 4-fight winning streak, shooting in for a quick takedown in the first round and following it up with elbows, knees and a barrage of submission attempts. It looked like the fight would be over then and there, but Munoz survived to fight another round. In the second, Weidman started strong again with another takedown, but Munoz  managed to get back on his feet. Weidman landed a standing elbow, Jon Jones style, which dropped Munoz. The Serra-Longo Fight Team star followed up with ground and pound until the fight was stopped. This win puts Weidman on the fast track to fighting Anderson Silva, though Hector Lombard is also in the mix.

Te Huna spoiled Beltran’s return to the UFC by putting on a striking clinic; the New Zealand-born Australian dominated all three rounds despite suffering a broken hand and foot in the very first round. Beltran managed to weather the storm and even landed some strikes of his own, but struggled with Te Huna’s speed. Te Huna also landed a few takedowns in the bout, and definitely showed that he’s worth the hype he’s been getting.

Simpson made his 170-lb. debut against Robertson, a late replacement for Jon Fitch and definitely a step down in competition. Simpson ate a few strikes, but landed some beautiful takedowns and turned up the heat in the final round. Although Simpson unleashed a fury of punches in the final round (many of them to the back of the head), he was unable to end the bout, and walked away with a unanimous decision victory.

After a back-and-forth first round with submission attempts from both fighters, Carmont landed a rear-naked choke in the second round, which he transitioned to from a crucifix position. Vemola was forced to tap.

T.J. Dillashaw showed why he was a first pick on Ultimate Fighter. After he and Vaughan Lee traded kicks and punches, the Team Alpha Male prospect worked for a rear-naked choke from backpack position. Although he couldn’t get under the chin, Lee tapped to the neck crank 2:33 into the 1st round.

Beautiful takedowns and crisp strikes spelled the win for the Brazilian, who stepped in as a late replacement for Paul Taylor. Although he didn’t finish the fight, he was 30-27, 30-27 and 29-28 on the judges’ scorecards. 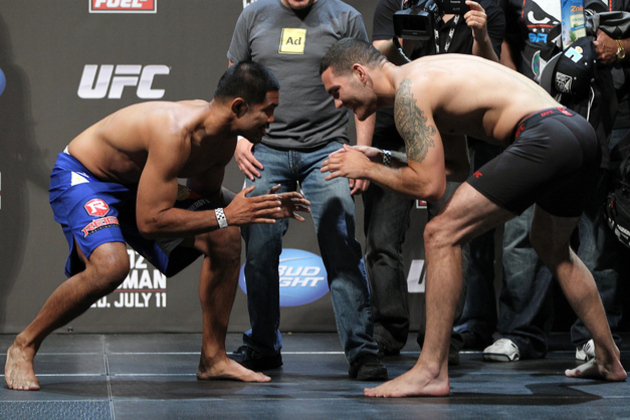 Damacio Page put on the heat in the first round, defending Caceres’ submission attempts and unleashing some ground and pound. In the second round, he wasn’t as lucky, as Caceres fished for a triangle and ended the fight. Page has now lost four in a row, which will likely spell out his walking papers.

Cariaso was successful in his flyweight debut,  used his speed and heavy hands to defeat submission specialist Josh Ferguson. “Taz” managed to take his back late in the third, but Cariaso delivered  his patent left cross repeatedly throughout the fight, along with some ground-and-pound, ultimately winning by unanimous decision.

Things didn’t look so good for Andrew Craig at first. He ate punch after punch from Rafael Natal, who smirked and showboated and looked like he was having a lot of fun in the cage. Natal continued to dominate in the second, but Craig came back from what would have been a 10-8 round with a beautiful head kick which sent Natal to the canvas. Craigh followed up with punches, but the fight was already over, a KO victory with just 8 seconds left in the round. Karmic justice.

In one of the most lackluster affairs on the card, Stittgen defeated Guimares by split decision–mostly through wall and stall. Guimares’ win was controversial, but he managed to growl loudly in the 3rd round, which some believe may have influenced the judges’ decision.

Assuncao landed a series of kicks, including beautiful spinning kick in the first round of the bout, with Tamada looking to counterstrike. Tamada worked for a takedown which Assuncao stuffed, and the BJJ black belt followed up with an attempted an anocanda choke, but no such luck. In the second round, Assuncao landed a left hook which dropped Tamura, and then followed up with a flurry of punches. Assuncao won by TKO 25 seconds into the 2nd round.